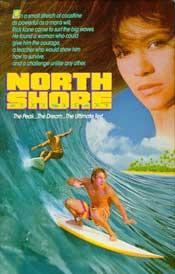 This movie’s plot is so silly that it’s worth at least one viewing, and no movie collection is truly complete without at least one turkey. Rick is the top surfer in the state of Arizona (The UK equivalent would be Rutland’s top mountaineer), a status conferred upon him after his gnarly exploits on two foot slop in his local artificial wave tank. With his trophy barely on the lounge shelf, and a mere 10 minutes into the story, he is jetting into Honolulu. Suitably clad (and with his pink twin fin surgically attached to his armpit), he heads off to ride some of the biggest and most lethal waves on the planet (as one does). A chance meeting in a bar with Mark Occhilupo (happens all the time) gives Rick the chance for a dawn patrol at Sunset Beach on his first day in real ocean waves (standard procedure). Before Rick has time to appreciate the full irony of riding into the Sunset at the start of a movie, a black 4×4 full of irate Hui members pulls up, and led by a scowling and bearded Vince (Gerry Lopez) they proceed to call him “Haole” and ruin his whole morning. Rick then manages to team up with contest hating soul surfer Chandler, the top shaper in the islands and a man who sports a better beard than Vince, thus ensuring the respect of the Hui. He also meets Turtle, (Chandler’s chief sander) who is presumably meant to be a cool blond surfer dude but actually comes across as a complete twit. As if that’s not enough, Rick falls rapidly in love with local girl Kiani (Yep – you’ve guessed it, Vince’s cousin) – it’s all go when you’re Arizona’s top surfer isn’t it? The final piece of the jigsaw falls into place when Rick’s beloved pink twin fin disintegrates as he tries to surf Pipeline on his second day – what a stroke of bad luck there, it doesn’t normally happen. Chandler then insists on training Rick by dragging him through the entire history of board design in a few short weeks. Needless to say, Rick is soon ready to enter the Pipeline Classic and compete with his hero, nasty pro surfer Lance Burkhardt (Laird Hamilton) – why are they always called Lance? I won’t spoil the ending by saying what the outcome is – I’ll leave that to the guy who wrote the ridiculous plot. This film has two redeeming features – firstly it attempts to address issues like localism, board design, wave formation, and soul versus contest surfing, but the silly storyline gets in the way every time. The other good thing is that after only 92 minutes it ends. The top surfers who took part in this movie as actors and extras probably did so for the money – let’s face it, being paid to surf isn’t altogether a bad thing, and they didn’t write the dire script or edit the resulting nonsense. However, if some Arizona guy drops in on them at Pipeline on day two of his vacation riding a pink twin fin, they shouldn’t really start complaining should they?

Could Bristol be the UK's next surf spot?