With a barrage of swell hitting South Africa, Greg Long and Grant “Twiggy” Baker and a small crew of Cape Town locals score all-time Dungeon’s…and we’ve got the proof. 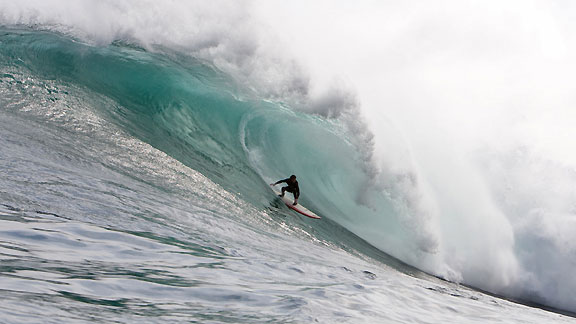 MurrayTwig summed it up pretty well, “We spend the entire winter in Cape Town waiting for a day like this.”

As the name suggests, Dungeon’s is not a place for the faint of heart. The weather is raw, the sea angry and the waves ferocious. Did I mention the prehistoric Megalodon known as “the submarine” that calls adjacent Hout Bay home? If all that doesn’t deter you from giving it a go, when you straighten out on a 20-foot wave or get caught inside by a gargantuan set, you get washed into a fur seal colony where the main thoroughfare is called “Shark Alley.” So if the waves don’t kill or seriously maim you, there’s a good chance something else will. Sounds like fun, eh?

To the dedicated group of big-wave hunters featured within, Dungeon’s is but one of many high stakes playgrounds where these surfers put it all on the line to feel the rush of riding the worlds’ largest waves. The Endless Winter is filled with expeditions to Tasmania, Australia, Northern California, Mexico, Europe, Chile, Africa and just about everywhere else in between capable of handling massive swells. As the forecasting models give birth to red and purple blobs of low pressure, big wave guns are prepped, skis are gassed and last minute airline tickets are charged to delinquent credit cards in the hopes of riding one wave that will stick with you for the rest of your life.

In the early morning light of August 16th, 2009, a large ground swell from the southern Atlantic Ocean started unloading on Dungeon’s. Located close to Cape Town, it is South Africa’s premiere big wave arena. During the past week, it has roared to life providing the biggest and best waves of the 2009 winter season. Greg Long, Grant “Twiggy” Baker, and a handful of dedicated locals wait months for the variables to synchronize. By all accounts, the conditions for the paddle surfing session that occurred were some of the best and cleanest to ever grace this fabled reef. 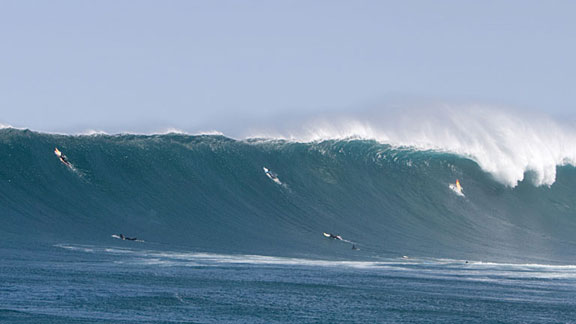 “This was a historic day at Dungeons,” said Twiggy, reflecting on the waves. “Carrying on from the contest last year, this swell seemed to be bigger, cleaner and heavier. 20-25′ with light off-shores and a crew of surfers ready to push each others limits.”

“Without question, the greatest paddle in session at Dungeons ever,” Greg added. ” In my eight seasons in Cape Town, I have never seen a swell so clean coincide with such immaculate weather conditions.”

Later that night, after a solid 10 hours in the water, words muttered between swills of beer and bites of meat seemed to be directed around this latest round of swells and the December 2007 swell that rocked the west coast of the U.S. And while it’s still early in the game, there’s a good chance you’ll see a couple XXL paddle-in nominees from this memorable day. Either way, anyone who was lucky—or brave—enough to catch a wave out there this day has already been rewarded.