Keala Kennelly is one tough chick. Probably the toughest in our surf world. She also happens to be the most successful woman surfer in Teahupo’o contest history with three wins, and she helped lead the tow charge there by becoming the first woman to whip into the mutant beast back in 2005. So, nobody was surprised when she showed up in Tahiti earlier this month, amping to get a piece of the Jurassic swell that was set to detonate the wave-ravaged South Pacific reef pass. While she was successful on the historic tow day, she suffered a horrific reef gash to the head on a, well…”normal size” paddle session with Bruce Irons and friends that led up to the Billabong Pro final.

We caught up with KK to discuss all of the happenings during her rollercoaster experience on the island.

You got some insane rides during the tow session. Maybe the heaviest day ever at Teahupo’o. Did you get the best wave of your life?

Hard to say, there was one barrel that I was really pleased with. I was pretty deep and the barrel started bending so hard on the reef. I started to feel the front of my board lifting up (from the lip exploding white-wash up into the barrel). I got heavy on my back foot and started rolling up the windows on the car as if I was going to fall backward into the barrel. So I shifted all my weight back on to my front foot, held my line and got spit out of the barrel. I was really stoked (and relieved) to make it out of that one. 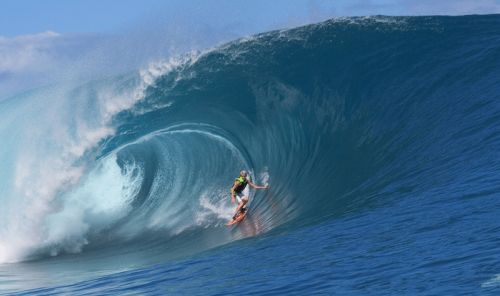 Were you shocked that you ended up getting injured on a much smaller day?

Shocking for sure. It was not something I was expecting to happen that day but in all honesty, some of my worst injuries at Teahupo’o have happened on smaller days. In 2005 when I towed Teahupo’o for the first time I had no problems and then two days later in a heat it was small and kind of choppy and I got stuck trying to kick out on the west bowl, got sucked over and smashed the back of my head into the reef and had to get staples.

Any big differences towing it massive and paddling at “normal” size, safety-wise?

One big difference I see is the amount of water that is moving on a huge day can actually protect you at times from hitting the reef if it fills in before you get thrown. When I tow big Teahupo’o I basically get suited up like a gladiator. Tow vest, helmet…I even had a carbon-fiber Don-Joy knee brace this time because I had a bad knee injury this year that I wanted to protect. When it’s normal paddle size I don’t wear all that gear (I would feel silly if I did). I feel like when you are paddle surfing some of that stuff can hinder your performance. The majority of my bad injuries at Teahupo’o have all happened farther inside. Big or small, though, that wave has a way of locking you in and giving you no exit strategy sometimes.

Does the extreme focus and vibe on a huge day like that help you stay safe?

I think so. On the huge days you are so hyper-focused. I try to be ultra-calculating about the risks I am taking. On smaller days when the sun is out, you are having fun and the water looks so pretty it’s easy to let your guard down.

Did you carry any injuries from the tow day to the day you got hurt?

My whole body was pretty sore from the tow day but it was all just muscular (sore neck and shoulders from being rag-dolled underwater). Bruce and Koby were feeling the same thing. There were a couple barrels I didn’t come out of that absolutely swallowed me but your adrenalin is so full-on that you don’t feel the full effects until the next day or so.

What was the vibe like being in the water with Bruce and the crew?

I felt really honored that Bruce invited me to come surf with him to honor Andy. Those boys are like brothers to me and I love them so much. The vibe in the water was kind of heavy you know. Bruce was feeling the loss of his brother big time and he had all eyes on him. It must be so hard to be mourning in the public eye like that. I really felt for him in that moment. I hate to see someone I care about so much suffering like that.

Describe the wave you went down on and what went wrong?

It was a pretty regular-looking wave. I took off and it kind of had a bit of bump that kept me from pulling into the barrel straight away. I had to make some adjustments and then saw that the next section was going to barrel so I bottom-turned and parked it in the barrel. I traveled for a bit, had to negotiate the foam-ball and that may have thrown me off and made me have to draw a higher line. I thought I was coming out but the lip just caught me in the head and threw me straight into the reef before I even realized what happened.

What was the pain like? Did you know instantly you were hurt pretty badly?

The pain was intense and I knew I was hurt. I could see lots of blood but I had no idea it was as bad as it was.

How did you get out of the water and to the hospital?

The water patrol scooped me up so fast that nobody in the water even realized I was hurt. I was on the point in the doctor’s tent within minutes. 20 minutes later I was in an ambulance with Mary, one of the event medics, on the way to Taravao Hospital. There they took one look at me and sent me in another ambulance straight to the main Hospital in Papeete to get emergency facial surgery. The cut was all the way to the bone, dangerously close to my right eye and there was reef inside that needed to be removed.

What happened at the hospital?

When I arrived at the main hospital in Papeete they first did a CT Scan because they were very worried I had broken my skull, cheek bone or injured my neck. We were all very relieved when the CT scan came out all good. From there I went into surgery where they removed the reef from inside my face and stitched up the huge gash by my eye, cuts in my head, chin and jaw. I counted 51 external stitches and there are a lot of internal stitches that will be absorbed by my body. The Tahitian team did an amazing job and took really great care of me during my stint in the hospital. I was also so grateful to have Mary (the Billabong event medic) there at the hospital with me so I didn’t feel so alone. She also made arrangements to have all my stuff picked up from where I was staying in Teahupo’o and delivered to me in Papeete which was awesome.

Was this your worst wipeout of your life?

This could be the worst wipeout of my life but it didn’t feel that way when it was happening. It seemed like a very typical wipeout and I was completely shocked when I saw the damage that was done. Total freak accident really.

How long are you out of the water and how is your recovery going?

Now I am back in Hawaii and my recovery is going well. I have an appointment to get my stitches out today so I am really looking forward to that. I should be back in the water just in time for the first North Shore winter swells.