15 people injured after rogue wave swept them away at U.S. surfing contest

15 people injured after rogue wave swept them away at U.S. surfing contest

Fifteen people had significant injuries, including broken legs and hands, authorities said. At least three of them were transported to area hospitals. Others were treated at the beach for injuries such as scrapes and bruises.

The California Department of Forestry and Fire Protection Battalion Chief Scott Jalbert estimated ‘a couple hundred’ people were on the seawall at the southern tip of Mavericks Beach when the waves struck, upstaging the surfing competition that draws some of the world’s top surfers. 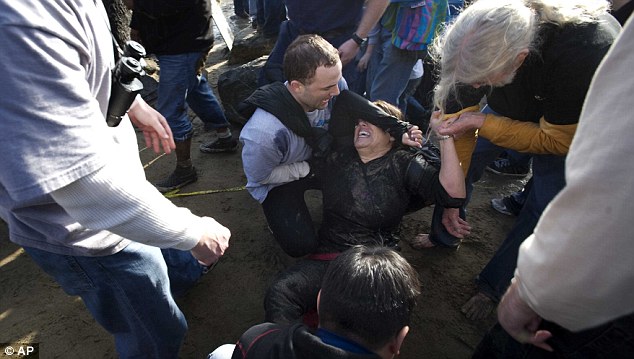 Bystanders scramble to help a woman with an injured leg 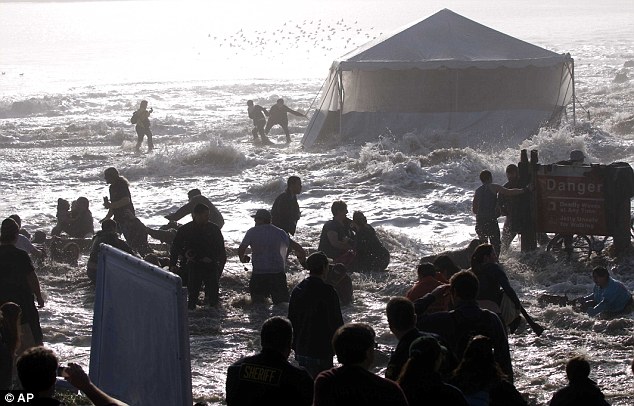 ‘Nobody was swept away into the water. They were just swept onto the beach area pretty hard,”‘Jalbert said. ‘It’s pretty rocky. We’ve cleared the beach area so this doesn’t happen again.’

The waves knocked out barricades, a spectator platform and a large scaffold holding speakers broadcasting the Mavericks Surf Contest, held in this tiny harbor town 25 miles (40 kilometers) south of San Francisco along Highway 1.

‘It just came out of nowhere and wiped us all out,’ said Pamela Massette of Corte Madera. Her left hand and left knee were scraped and bleeding and she was wet from head to toe. 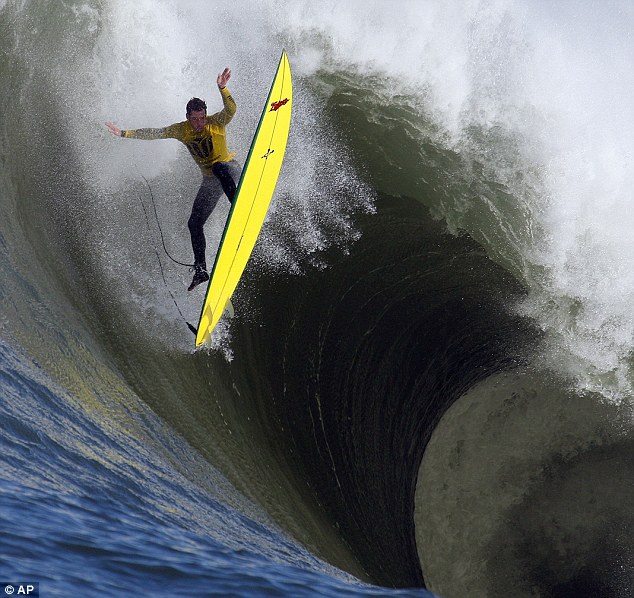 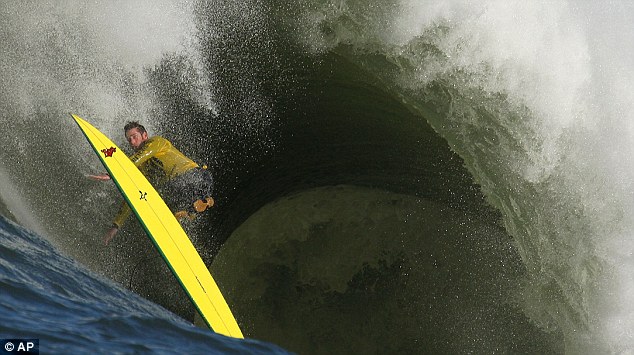 Ion Banner falls from his surfboard into the ocean

Brandon Snider got his injured knee taped up by a contest volunteer. Everyone’s concentration was on the contest when a 5-foot to 6-foot  wave ‘wiped out the entire seawall,’ he said.

At least two more rogue waves came through the same area during the high tide, reaching the seawall, knocking down more spectators and sending others fleeing in panic. The subsequent waves were not as large or strong as the first two and did not cause any apparent additional injuries.

‘This is probably the tallest waves I’ve seen. They’re not the thickest, but they are the tallest,’ Bart Miller of Half Moon Bay said after coming out of the surf. Miller doesn’t compete but said he has surfed on the same day as all seven Mavericks contests over the years.

Spectators lost cameras, cell phones and backpacks as the waves swept the seawall.

Authorities yelled for people to get back from the shore, but could not use the public address system because it had been swept away.

Officials were not allowing any new spectators to reach the beach, though they were allowing those already there to stay. 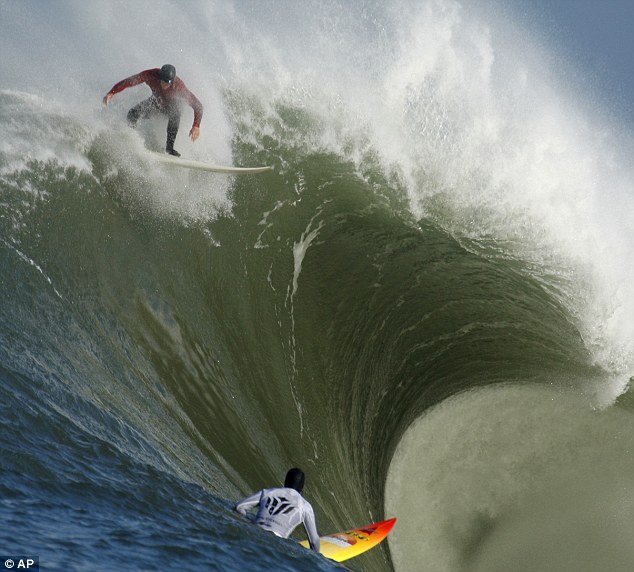 Evan Slater, top, surfs a giant wave over Darryl “Flea” Virostko during the first heat of the Mavericks surf contest 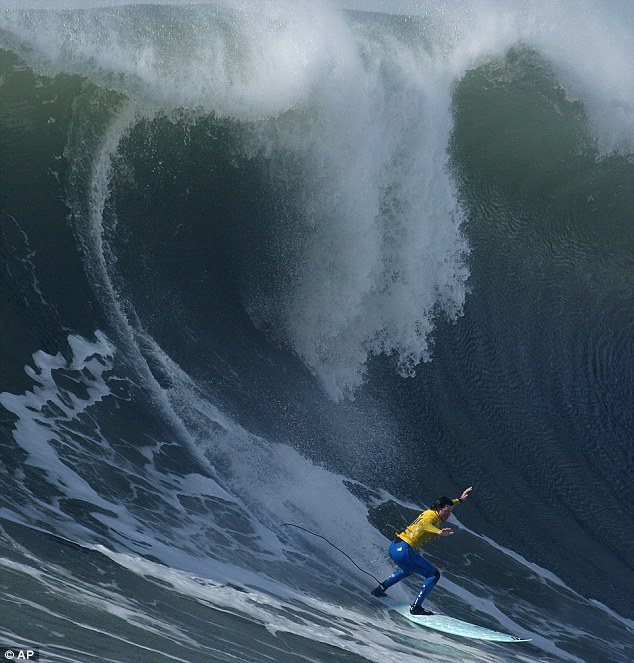 Shane Desmond surfs a giant wave during the finals

Authorities moved bystanders from the seawall and about 90 metres back from the water after Saturday’s incident.

Roughly a thousand spectators could watch a huge television screen that was showing the surfing contest offshore but couldn’t hear who was participating or see who was leading the competition because of the washed-away sound system and leader board.

Two volunteers posted a makeshift leader board and told the crowd that half the field had been eliminated by noon, leaving 12 semifinalists.

The surfing contest offers $150,000 prize money, making it the most lucrative big-wave contest in the world.

The contest is not held every year and is called only when conditions are prime. Competitors voted to hold the contest because forecasts called for record-breaking tall waves, despite warnings that strong winds could make those breakers dangerously unpredictable.

During previous contests, spectators have been doused by waves and sometimes knocked down, without suffering serious injuries.

The competition includes 24 world-class surfers. Six surfers at a time are ferried by jet ski to the surf spot. Each heat of six surfers competes for 45 minutes, with each competitor allowed to catch up to 10 waves. Surfers are judged on their best two waves, and the top three scorers in each heat advance to the semifinals.

‘If they did Mavericks with little waves, it wouldn’t be Mavericks,” said Diana Henderson, a National Weather Service Forecaster in nearby Monterey. “Stay out of the water.’

Waves offshore were breaking at 25 to 30 feet, she said. They were expected to subside last night but be breaking at 15 to 17 feet today, when Henderson expected another high surf advisory would be in effect.