Wildcard Stephanie Gilmore does it again

Wildcard Stephanie Gilmore does it again 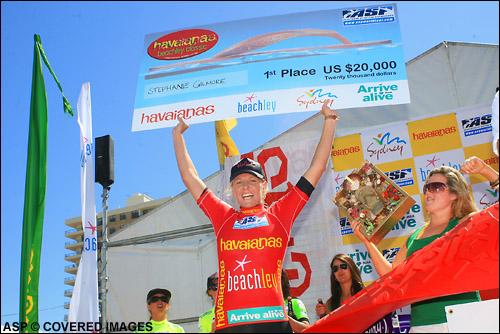 MANLY, Australia (Wednesday, October 11, 2006) – Wildcard surfer Stephanie Gilmore (AUS) wowed the world when she became the youngest-ever winner of an ASP Women's World Tour event in 2005. She's stamped herself in the history books with her win at the $US100,000 Havaianas Beachley Classic today.

The 19-year-old is the only individual in surfing history to win two ASP World Championship Tour events as a wildcard.

Surfing from the trials to take out the richest event in women's surfing history, the ASP World Qualifying Series (WQS) No. 2 led the entire 35-minute final to post an emphatic victory at Manly Beach in Sydney, Australia, this morning.

"This whole event has happened in just three days and now it's all over!" Gilmore said. "I took it heat by heat and everything's fallen into place. It's unbelievable. Layne's a six-time world champ and one of the best competitors in the world; she's really smart in a heat and I have learnt a lot watching her. It's been great just being out in the water with her, so to come out on top, I just can't even explain it." 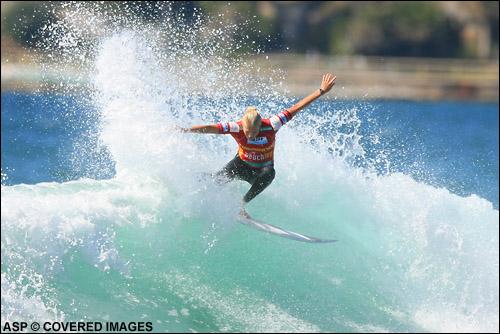 Despite not yet being a full-fledged fixture on the ASP Women's World Tour, Gilmore, who is already one of the highest paid female surfers in the world, earned US$20,000 for her win today. That figure is double what the average women's world tour event doles out.

Gilmore didn't paddle out expecting to earn the cash easily. Beachley's Semifinal win over Chelsea Georgeson (AUS) had the Manly local looking the girl to beat.

"I was watching Layne and Chelsea's Semi and Layne got a 9.0 and a 7.5 and I thought, 'OK, this is going to be really hard,' but I had a little plan and things changed around and time went a lot quicker than I thought. I was sitting out there in the lead, but not by much and I was like, 'Go, get a wave girl, go!' and then I got that last one at the end which sealed it. My heart was pounding like crazy, I can't believe it!"

Currently rated second in her first full year on the ASP's World Qualifying Series (WQS), her place amongst the elite on next year's tour is almost assured. Her prior performances indicate that she'll stir things up when she gets there.

"I am sure by me winning the girls are going to want to smash me even harder now," Gilmore said. "I guess they've been thinking "Oh, wildcard,' we can just cruise a bit, but I'm sure now they'll just want to come out in front of me." 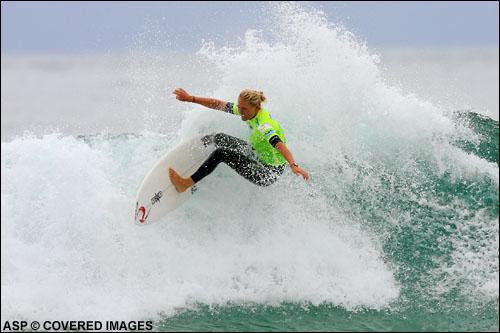 Event namesake Beachley, who has been beaten by Gilmore before, certainly wanted to come out in front today. Unfortunately for her, it was not to be.

"It came so close to a fairytale ending for me and I was bitterly disappointed not to win but I am so relieved it is over," Beachley said. "I'm really proud of Stephanie but I'm proud of myself for staging such a great event too."

Beachley joked that she did everything right whilst organizing and running her first ASP Women's World Tour event, but couldn't remember why she thought putting Gilmore on the invited trialist list was a good idea.

Beachley, who has been sick and rundown since the event started, couldn't recover her Semifinal form to stop Gilmore. She scratched around the line-up looking for waves with high-scoring potential but came up short.

"The heat was really starved for waves so I paddled down the beach to see if I could get some open faced ones but I really didn't feel comfortable down there." Beachley said. "I came back to my little secret spot up here that everybody's been surfing but the clock just kept ticking. There was 23-minutes and then there were 13-minutes and then it went down to 7-minutes and I still hadn't caught a wave. I spent a lot of time sitting around waiting for a quality wave and if we'd had an extra 30-seconds in the final I could've won it, but that's just the luck of the draw."

Still, Beachley leaves her event the world ratings leader, having overtaken Melanie Redman-Carr (AUS) who was also eliminated by Gilmore in Round Three.

"It just wasn't my day," Georgeson said. "I went out feeling good and got some average scores but the waves I caught didn't really open up. I tried to sit there and wait for a decent one but it never came. I let one slip by that Layne got when I thought there was one behind it, but it didn't happen. There's not much you can do in that situation."

Georgeson also has Gilmore to thank for keeping her world title chances alive today. Had Beachley won the Havaianas Beachley final, Georgeson would have been mathematically out of the running to defend her world crown.

Georgeson knows all too well how hard the race for a world title can be, but is even more wary of what it will be like next year when Gilmore is a tour staple.

After Steph's result on the Gold Coast the last year, when she won that event, we all started training madly," Georgeson said. "It is good for the sport though, you get the younger girls coming up and it's like a generation change; it's good for us."

Gilmore beat former world champion Sofia Mulanovich en route to victory today. Visibly uncomfortable with her equipment early in the semi Mulanovich made a mad dash to the beach to switch boards halfway through her heat.

"My board broke this morning, it got really dinged, and I was like, 'Ok, maybe I should just go out with the other one instead of breaking my board in the middle of the heat, but it was a bad choice," Mulanovich said. "I hadn't ridden that board for a long time so it was a bad choice that created a lot of insecurities for me too. But whatever, I made a mistake in that heat, Steph is a great surfer and at least I lost to a super talented girl."

The world title scenario heading to event No. 7 on the ASP Women's World Tour, Sunset Beach, Hawaii, is as follows: Beachley can clinch her seventh world title with a win at Sunset if Melanie Redman-Carr bows out with an equal or less than 7th place finish. If anything less occurs, the world title race will stretch to the final event of the year in Maui. Georgeson must finish ahead of Beachley at Sunset to remain in contention.

Mundaka turns on for Billabong Pro round 3

Billabong Pro Mundaka: The bank is back