Mick Fanning Wins in Brazil and moves to No.2

Mick Fanning Wins in Brazil and moves to No.2 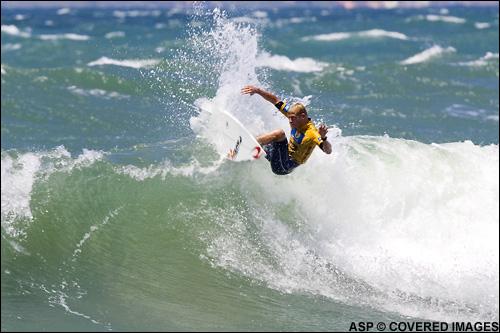 IMBITUBA, Brazil (Wednesday, Nov. 8, 2006) – Australian Mick Fanning has rocketed to world No. 2 on the Foster's ASP World Tour ratings with an emphatic win at the Nova Schin Festival presented by Billabong today.

"I rocked up this morning and it looked exactly like it did one of the years I got second so I felt really confident,” Fanning said. “I've already had two seconds in Brazil and I didn’t want another one so I went out there and tried to give it my all and it paid off."

Held in large and wind affected six foot (two metre) waves in Imbituba, Brazil, the Nova Schin Festival final was a largely one-sided affair. Favoring the rights and posting the highest heat total of the event (18.77 out of 20.00) Fanning caught nine waves to Hobgood’s five. With a 9.5 and 9.27 (out of a possible 10) in his scoreline, Hobgood was left needing a combination of scores to defend his title.

"We couldn't really hear out there and I just wanted to keep in rhythm with the sets,” Fanning said. “I knew if you get caught, it just washes you in and you get flustered so I just kept trying to catch waves. I felt really relaxed and everything just seemed to feel really, really good. I got two waves that were pretty good so I'm stoked."

The win is Fanning's second for the year and his No. 2 rating bitter sweet after bowing out of the world title race won by Kelly Slater (USA) who claimed the crown in Spain last month. Earning his first 2006 victory at the Billabong Pro JBay in July, his result today is another chapter in what has been a late season fairytale for Fanning.

“I’m letting it happen instead of trying to make it happen,” Fanning said. “Every time I paddle out now I feel so much more relaxed. Three finals and two fifths out of the last five events is pretty good.”

"Every year I've been on the Foster's ASP World Tour, I've placed one better the next year,” Fanning said. Hopefully this year I finish second and then next year I get that first."

Hobgood, who beat his twin brother CJ Hobgood (USA) in the quarters and Fred Patacchia (HAW) in the semis en route to the final, posted two 9.5s over the course of the contest. He would have had to post two more in the final if he wanted to defend his title today.

"Mick has been the in-form surfer pretty much the whole event, he was just better out there,” Hobgood said. “I knew Mick could go on pretty much any right and turn it into a score and that I was going to have to wait for the cleaner ones because it was harder on my backside to negotiate the bump. I had a couple of good waves and I had the opportunity, but all I did was a couple of ok turns and then a couple of bad ones. It was there but I just think he was the better surfer."

Pattachia climbed 10 spots from 24th to 14th with his semifinal showing and is now assured of a 2007 Foster’s ASP World Tour berth.

“I came here with a goal and that goal was to be in requalification mode going into Hawaii,” Pattachia said. “I came here and accomplished that. A third is my second best result this year. I’ll probably been in the teens (on the Foster’s ASP World Tour ratings) now and hopefully I can get another good result at Pipe and jump up even further."

Philip Macdonald (AUS) posted his best result of 2006 today. The third place finish bumped him up one spot on the ratings – he now sits in 12th.

“It’s my best result of the year,” Macdonald said. “I just wanted to make the semis and get a result. The conditions are really hard out there and I got a bit unlucky. I felt like I gave it my best shot and that’s all you can do."

Darren O’Rafferty (AUS), Greg Emslie (ZAF) and Bobby Martinez (USA) round out the surfers who contested the chaotic six foot surf at Imbituba today. Losing in the quarterfinals, they will leave Brazil with equal fifth placings.

Round one of he Billabong Girls Pro Brazil underway in Itacare

No surfing at the Rip Curl Pro Mademoiselle today